As we start the new month of August, let’s take some time to talk about the Nollywood actors we lost last month. The Nigerian movie industry lost 3 of its actors in the month of July.

Even though d**th is inevitable, we can’t overemphasize how sad the loss of people we love and care about is.

In this article, we’ll be talking about 3 Nollywood actors who passed away in the month of July

Oluwasolamipe Onayiga was a veteran Nollywood actress who was popularly known for her role in the hit sitcom ‘Fuji House Of Commotion”.

The news of Sola Onayiga’s d**th was announced by Seun Oloketuyi who is the founder of the Best of Nollywood Awards.

According to Seun, Sola passed away following a two-week-long admission to the intensive care unit of the Lagos State University Teaching Hospital.

Abuchi was found d**d in his apartment in Asaba, Delta State.

His d*ath was confirmed by the Police Public Relations Officer in the State, DSP Bright Edafe.

According to the PPRO, he was k*lled and his d**d body was locked inside the house.

Ada Ameh was a popular Nigerian actress who was famous for her role as ‘Anita’ in the movie ‘Domitilla’ in 1996.

According to reports, the actress d**d in Warri, Delta State.

She was said to have been a guest of an oil company toyshop when she suddenly coll*psed.

She was rushed to the hospital but passed on before they could get to the facility. 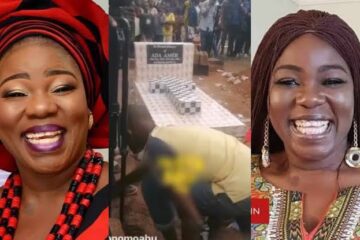