His name is Ndayisaba but everybody in his village better know him as Beeman, although he doesn’t consider himself to be just a man among bees, but a King. So the best way to address him, as he clearly puts it, is to call him ‘The King of bees.’

The King of bees has a special ability ‘to control bees,’ as he puts it. He can attach them to his body and walk around comfortably, and they would not dare to sting him, but rather, protect him.

Ndayisaba has been polishing this skill for the past 30 years to the point, he said, he can control bees. “I have control on bees, I sent some bees out, others to fetch water and others to look for food.”

You probably haven’t heard of any other beekeeper with that much capability, even professional beekeepers around the World can’t say to control bees in that way, with all the technology at their disposal. Ndayisaba does not use anything other than his own natural ability and his way of communicating with bees.

So how does he do it?

“In order to control bees, I have to look for the Queenbee first, then put it on my body, and other bees will come over me,” he explained.

His neighbours are not bothered by this man and have learnt that his activities are not harmful to them, even if they can be extremely scary.

“People are not bothered, they are just happy and they want me to teach them. They are not afraid of me but want to learn from me,” he said.

Among the beneficiaries of his activities is Augustin, a 66 years old neighbour. He’s been in the bee industry for a whole 44 years since he started back when he was 20, and as he inherited this role from his father and grandfather, all of whom were professional beekeepers.

In his years of experience, Augustin has never seen anyone like Ndayisaba, and thus he has decided to come and learn from him in order to improve his own activities.

He is not a small player himself, he has developed his own way to communicate with bees especially through singing to them, a strategy he deploys when it’s time to harvest honey.

Ndayisaba urged people not to rush to imitate his technique, because of the danger that can come out of that. He told Afrimax that he is pretty sure of the danger of this activity as he still plays caution even with his 30 years of experience.

As a believer, he believes human should have total control over animals, and he is doing just that. 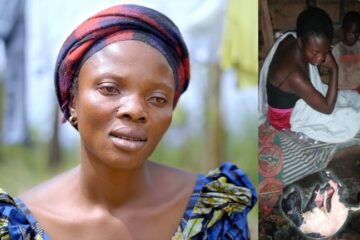