R. Kelly has stepped forward to den**es he fathered a child with Joycelyn Savage.

It’s not very often that R. Kelly publicly addressed matters of his personal life from behind bars, but perhaps he felt the need to speak on this one given that the story has mushroomed over the past several weeks.

In August of this year, the singer’s lawyer called her pregnancy story “ins**ne” and months later she insisted that she gave birth to the emb**ttled R&B singer’s child.

In a new audio from prison where R. Kelly spoke with R**ck Party of The Natasha Simona Sequence show, the singer said Joycelyn Savage did not gave birth to a child nor did he released an album. “She didn’t have a child. I didn’t put out no damn album,” Kelly insisted.

Joycelyn Savage’s father, Timothy, is also saying that his daughter was not pregnant and that she does not have a baby. She recently revealed that she had given birth to R. Kelly’s baby- Ava Lee Kelly.

“My baby girl Ava when you were born and my whole world shined so bright. I knew that it was no longer about me anymore it was about us. Though the world is cold , I promise to always protect you. I am so happy to be your mother & you bring me so much joy,” Savage’s account on Instagram captioned photos of a newborn.

In a statement he read that was posted to social media, Timothy Savage says he doesn’t believe that his daughter had a child, and he is investigating the account that posted the child.

“My daughter Joycelyn is not pregnant. This is 100% accurate. My daughter also, whoever also did the Patreon account is over this. So rest assured. I am investigating this to the fullest,” Timothy began.

“The little baby on the account is a pretty little baby no doubt about that. If I had a granddaughter, I would be the first to say I love this child, no matter what the situation is. Period. But rest assured that’s not my granddaughter,” he added.

Timothy also said that unnamed persons are spreading rumors to make up the rumors about the pregnancy, and he claimed that his daughter is hidden from her family whom she labeled as ev*’l and cr**el.

The father said that he had also messaged his daughter on the account to see if she would respond, but her responses did not sound like her. The father outrightly questioned if his daughter was still living.

In the meantime, the account that posted the baby also responded in a Shade Room comment to the father’s initial video.

“This is why my child will not be around you guys for this exact reason,” one response read.

Another comment also sought to explain Jocelyn’s cutting her parents off.

There are reports that the photo of the baby is from a woman who gave birth in 2016 and was found on a Google reverse search. 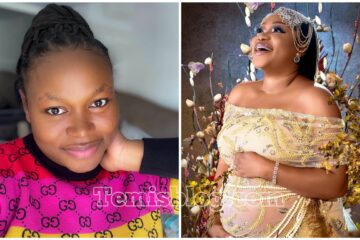